I gave the new setup a good workout yesterday, with about 18 miles in 90 minutes (slow, yes, but I am slow even when I feel like I'm going fast). I had to take an early break because my HR went higher than I would like, but also because that seat was killing my poor asterisk.

Took another break after another 3 miles because of my backside, and yet another 4 miles later. I normally don't mind a break at 5 miles unless I've hit my stride and just need to keep going, but at 3? Too soon.

All in all, though, it didn't matter, because my knee was killing me either way. This isn't even my usual pain from going up stairs or ladders; it's specific to riding and I suspect has everything to do with the fit of the bike. In changing the bars, I changed the geometry of the bike, which I wanted in order to avoid back and shoulder pain that had not let up after 150-200 miles.

I think I gave getting used to the flat bars a good try; I'm not sure I can give this setup that much time without incurring an injury.

Now, I can ride the Pedego with nearly zero knee pain. It only hurts once in a while, when I push off from a stop, and it's not the same pain I'm getting with the Marin. That pain is the same kind and location I get when going up ladders and stairs. 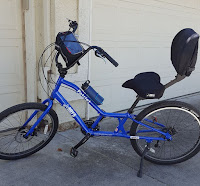 So...I'm kinda looking at crank forward bikes, hoping to approximate the geometry of the Pedego, but without the weight of that particular frame. I tried the Spouse Thingy's semi-recumbent Day 6 Patriot, but I can't even sit all the way on the seat and still reach the peddles, even though it's a small frame. I only know of a couple more options, one of the Electra Townie line, either the Path or Commuter.

I'm not even sure I can find one of those locally and that's not something I would buy online.

So, we'll see. I'm not giving up on this. Riding has become way too important to me, but I don't want to do it all on an electric.
Posted by Thumper at 5:40 PM