I truly did think I would be back on the bike on January 1st.

It only took 4.5 months to really get going. There were a few false starts, a lot of that owed to bike, hip, and knee pain (arthritis sucks) but it took signing up for the DetermiNation Cycling Classic to get rolling. I'm not sure why it worked, but once I'd taken a few (shortish) rides, the want of getting on the bike more often took hold. I set a goal of 200 miles to be done between April 16-May 16, and hit that yesterday.

I might have gotten closer to 300 if not for several days I just wasn't home to ride; we took some time off work and did fun things together, so no regrets about it. 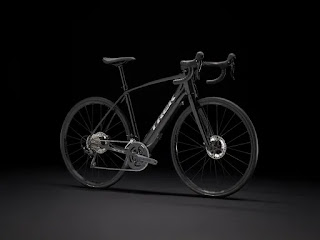 I had hoped I'd have the Trek I ordered last September for this ride--it was expected end of April--but that's been pushed back to next January. By then, I may not want it. I mean, I will want it, but there's no need to buy it, really. Mostly because I stumbled onto a Domane+ ALR and it's got everything I wanted from the AL5. And more.

Yes, it's technically an ebike. But the beauty of this thing is that it rides like a dream without using the pedal assist--you don't even need to keep the motor and battery on the bike--and it's balanced well enough that the additional weight isn't a big deal even if you have the battery in place.

I'm doing 99.5% of my riding without using the assist. That remaining .5% is when I turn it on for the sheer fun of it. Thing is, I don't really go any faster, it just takes some of the drag off my legs. There's no throttle, so there's also no getting away without pedaling.

Why did I think this was a good option?

The aforementioned arthritis. I have it in my spine, hips, neck, and at least one knee, and it's not going away. This way I have peace of mind knowing that if I get into trouble 10 miles from home, I can turn it on and get home.

And damn, my HR gets up no matter what I do. Even riding with some assist, I'm hitting 150. I struggle to get that on my other bike...probably because I'm not spinning as fast.

So we'll see. But so far I am super happy with the decision to get it, and I am having a freaking good time riding again.

Glad you're riding again! I get the arthritis concerns, my back is totally unhappy with me right now. The new bike sounds like a lot of fun!